Chapter 1 : Preparatory concepts for the study of harmony
This chapter contains the basic tools for the comprehension and application of the material presented in subsequent chapters. CONTENT 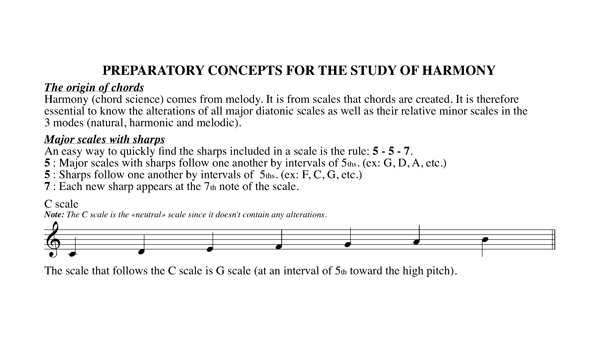 Chapter 2 : Chords building
This chapter explains how 3 sounds chords are built from the major and minor scales in 3 modes, their nature (Major chord, minor chord, etc.) and their identification (names). CONTENT

Chapter 3 : The 7th chords
This chapter explains how to embellish the chords with a 3 sounds by adding a 4th note: the 7th. CONTENT 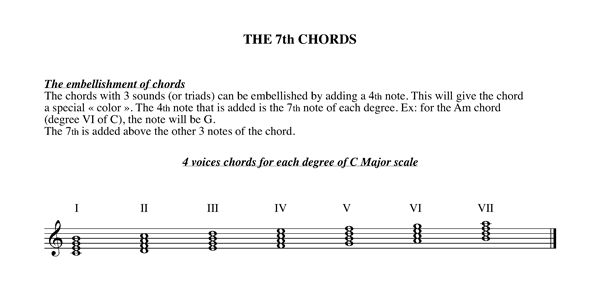 Chapter 4 : Chords application on the fretboard
This chapter allows the application of chords in 4 voices (sounds) from the 5 chord patterns (models), their configurations, the way to modify them and the various choices of the voicings. CONTENT 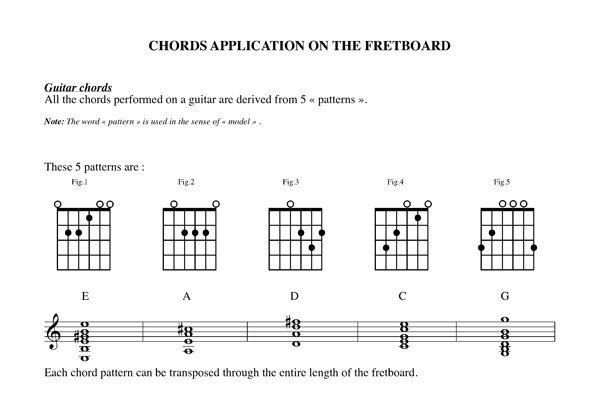 Chapter 5 : The 4-voicing chords
This chapter approaches the 7 degrees in 4 voices on all major and minor keys (in 3 modes, natural, harmonic and melodic), their application on the guitar from the chord patterns with a choice of voicings to execute with the right hand. CONTENT 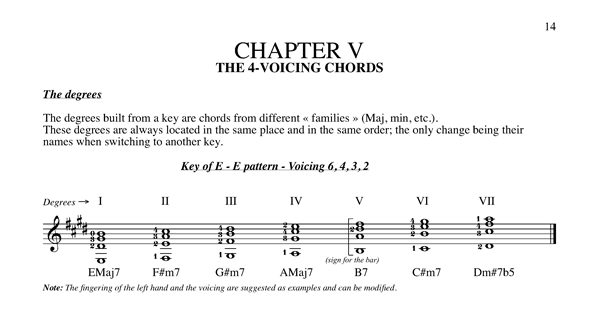 Chapter 6 : The chords families
This chapter allows to identify the various types of chords by cataloging them by «families» major, minor, dominant 7th, diminished, etc., and how we add notes (extensions). CONTENT

Chapter 7 : Chords inversions
The inversion is a chord in which the order of the notes was changed. This chapter explains how to identify the various types of inversions. CONTENT 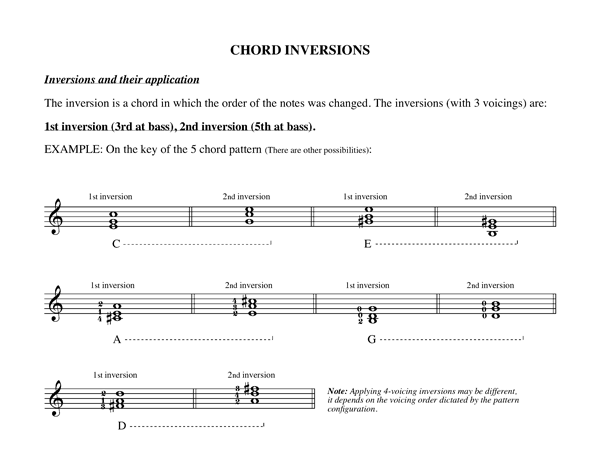 Chapter 9 : Chord substitutions
Substitution is a method that is used to replace a chord with another while keeping a link to the initial one. This brings a different way to think of chords and as a direct result, a more sophisticated harmonization. CONTENT 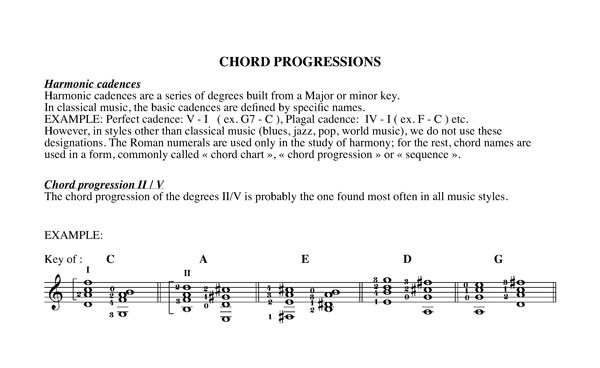 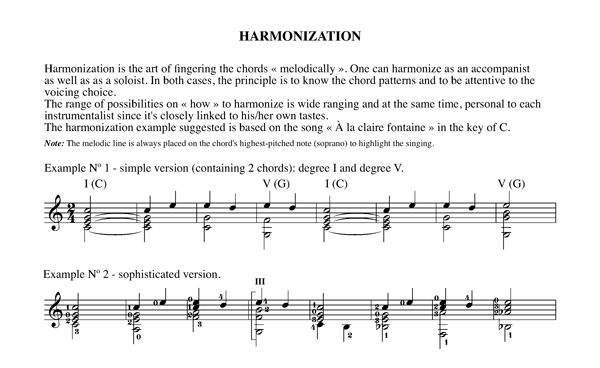 Chapter 12 : The scales/patterns
Like chords, each scale becomes a transposable pattern along the entire length of the fretboard. The scales are played in 2nd positionThis concept is intented to facilitate identification and visualization of notes on the fretboard, as well as improving the performance of melodic phrases. CONTENT

Chapter 13 : The modes
Apart from the three minor modes (natural, harmonic and melodic), there are other modes. These modes are scales built from a note other than the usual tonic. So by moving the intervals of the major diatonic scale, it create’s a different sound world. CONTENT 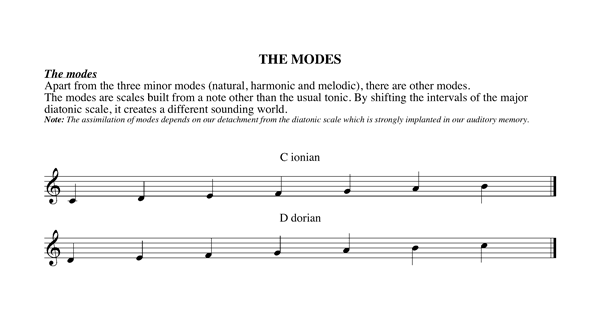 Chapter 14 : Other scales
Other types of scales used in diverse music styles. CONTENT 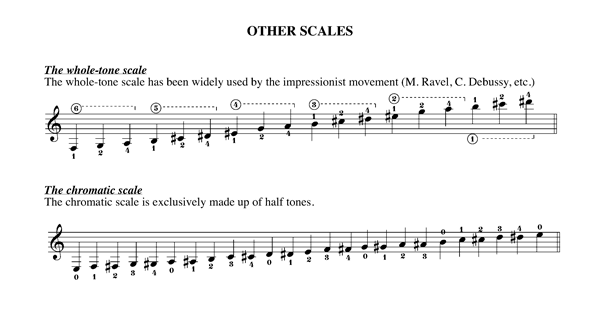 Chapter 15 : Technical exercises-right hand
This document is not intended to cover technique; however, it’s importance is paramount. It allows both hands to develop muscular strength and gain flexibility, making performance more expressive and musical. CONTENT 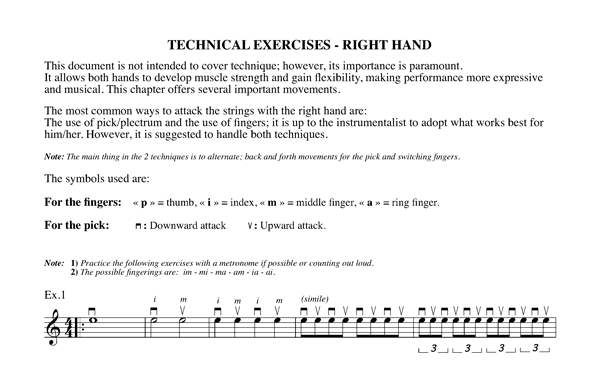 Chapter 16 : Technical exercises-left hand
Various movements of the left hand which we often find in the execution of solo guitar pieces or in improvisation. CONTENT 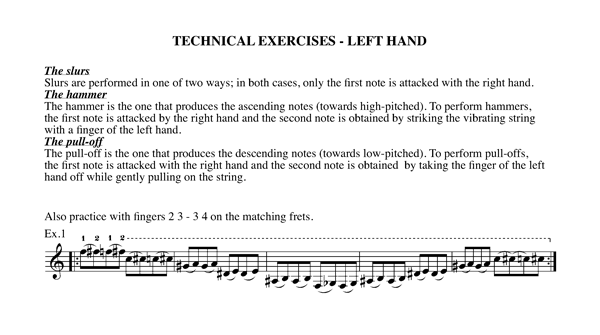 Chapter 17 : Rhythm
Various notions and instructions that explain how to approach and control all that is linked with rhythm. CONTENT 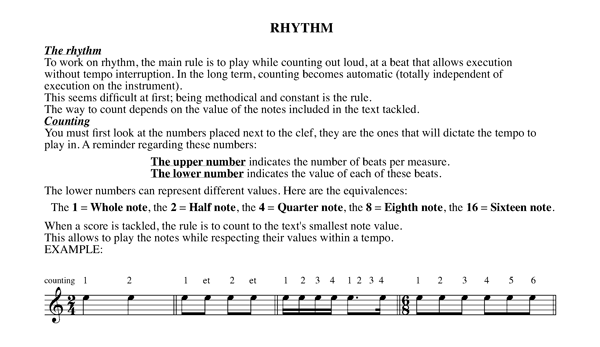 Chapter 18 : The blues
The blues (jazz ancestor) is a music style handed down verbally from father to son and is played by ear. This chapter proposes some of the main tools for understanding various forms of this very diversified style. CONTENT 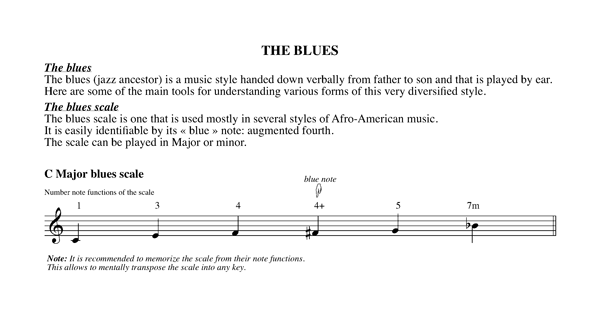 Chapter 19 : Preparatory exercises
This chapter contains exercises of preparation for future applications with audio tracks. Most of these exercises are based on topics discussed in previous chapters. CONTENT

Chapter 20 : Pratices exercices
This chapter develops the execution of various of the tools approached previously applied with audio tracks (accompaniment). The purpose is: create a language through proposed musical phrases; one of the most important steps in improvisation , and to develop the harmonico / rhythmic side allowing the control of the accompaniment. Every tool is distributed on tracks which differ on the speed and the style (jazz and Latin beat/Brazil). NOTE : The tracks 1, 2 and 3 below, are in video format only as examples. The original tracks include in this method are in MP3 format. CONTENT Suggestions of rhythmic formulae (jazz and latin beat) – Exercises for the work of the melodic phrases and the chords: Maj7 – min7 – 7th of dominant – 7sus4 – Maj7 and min7 – Chord progression II / V – Chord progression II / V / I in major – Chord progression II / V / I in minor harmonic – Maj7 and min7chords in ternary beat ( jazz waltz – Chord progression I / VI / II / V (Rhythm changes). EXAMPLE TRACK 1 You have to play the phrases proposed in the method with accompaniment (piano, bass and drum) – style « Latin beat/Brazil ». TRACK 1

EXAMPLE TRACK 2 You have to play the chords proposed in the method with accompaniment (bass and drum) – style “swing”. TRACK 2

EXAMPLE TRACK 3 You have to play on a ternary rythm the phrases proposed in the method with accompaniment (piano, bass and drum)- style ” jazz waltz “.. TRACK 3

Repertoire
This chapter proposes a repertoire of various pieces with audio tracks accompaniment in the styles jazz and Latin/Brazil. The work of every piece can be divided as follows :

NOTE :The tracks 1, 2 and 3 below, are in video format only as examples. The original tracks include in this method are in MP3 format. ” OLD TIME “

I have designed this document in order to share my point of view and to deal with the different basic harmonization and improvisation tools. The way we harmonize and improvise is individual, depending on the choice of chords, melodic phrases, etc. A question of taste! At the beginning, the challenge is to learn the basic musical tools and, most important, to constantly keep them in mind in order to be able to use them at any time. The concept is simple but broad; its many ramifications and connections (keys, chord substitutions, etc.) easily become a kind of maze if we are not methodical. The goal is to create a path for ourselves which in the long term will become automatic mental and visual reflexes. THIS METHOD IS INTENDED FOR:

The practice tools described in this document are primarily based on jazz and brazilian music but the concepts apply to music in general, whatever the style.